Deshaun Watson is the franchise quarterback the NFL needs: Cynical and self-absorbed, 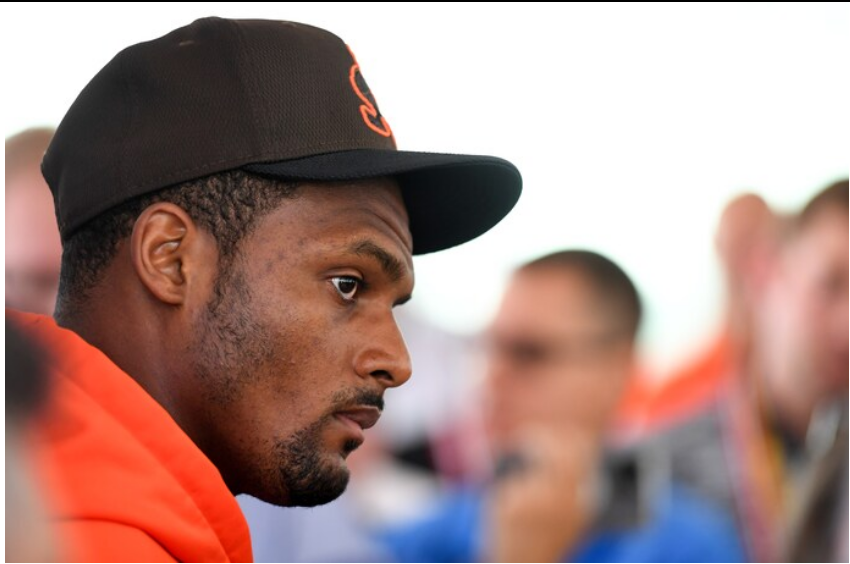 Deshaun Watson speaks to the media after details of the settlement of his case were released. (Nick Cammett/Getty Images)

On Thursday, the National Football League and the NFL Players Association reached a settlement in the disciplinary matter involving Cleveland Browns quarterback Deshaun Watson. Watson was suspended for 11 games without pay after being accused of sexual misconduct by more than two dozen women during massage sessions.

Watson must also pay a $5 million fine and agree to be evaluated by behavioural experts and complete their recommended treatment programme.

The NFL announced in a statement that Watson would pay a $1 million fine and the league and the Browns would each donate $1 million to a fund that would benefit organisations in the United States “that educate young people on healthy relationships, promote education and prevention of sexual misconduct and assault, support survivors, and related causes.”

Watson’s ban will begin on August 30, the date NFL teams must reduce their roster sizes to the league mandated maximum of 53 players. In Week 13, the Browns will travel to face his former team, the Houston Texans, and he will be available to play for the team again after being reinstated on November 28.

According to sources cited by ESPN’s Adam Schefter, Watson will not be reinstated until he has followed the evaluation and treatment recommendations of a third-party behavioural expert. Sources say that Watson’s reinstatement could be delayed and he could face additional sanctions if he doesn’t follow the treatment plan.

In a statement provided by the Browns, Watson expressed his appreciation for the support he had received throughout his brief time with the team. “Once again, I’m sorry if this has caused you distress. Whatever outcomes resulted from my actions, I accept full responsibility for them. Going forward, I want to improve both on and off the field, and do all I can to help my team when I can’t be there in person. In Cleveland, I feel like I have a lot of potential for growth.”

However, on Thursday afternoon, Watson spoke to the press and steadfastly defended his innocence.

Even though he had paid a settlement, he maintained his innocence, saying, “Just because settlements and things like that happen doesn’t imply a person is guilty of anything.” “I think a person has a chance to stand on his innocence and establish that,” he said, “and we proved it from a legal side, and I’m simply going to continue to push on as an individual and a human.”

Do the Browns trade for Jimmy G. while Deshaun Watson is sidelined for 11 games?

Watson: “I deeply apologise to the ladies whose lives I have affected.” 6d

Watson, the Browns’ quarterback, has been suspended for six games and will not be fined $17,000.

Jake Trotter Watson has also expressed an interest in sharing his perspective.

That’s the strategy, he affirmed; that’s the objective. “Throughout this ordeal, I’ve felt like I’ve been trying to present my side of the story. However, many people didn’t give it much mind.”

Watson was questioned about his apology message from last Thursday and his previous statements.

“Regarding everyone who has been impacted by this. It seems like a lot of folks were set off “This is what he had to say, he explained.

When pressed further on whether his previous apologies were directly to the women who made charges against him, he said, “I have apologised to all women, so anybody who was affected.”

When pressed on Thursday about Watson’s claims of innocence, Browns co-owner Dee Haslam said: “His view is highly valued here. Deshaun, I believe, will get a great deal of insight into who he is via therapy.”

“Time is needed for counselling. When you go to counselling, you won’t suddenly feel better the morning after. I believe there is a layering effect at work here, and it takes a great deal of time (weeks, months, perhaps even years) to reach the point where you have a profoundly deeper understanding of who you are “”, she remarked. “Since he first arrived, I believe Deshaun’s situation has improved. However, his development will not occur instantly. He’s 26, and he’s just started therapy; it’s going to take time.”

Jimmy Haslam, a co-owner of the Cleveland Browns, has expressed his faith in second chances.

Browns head coach Kevin Stefanski announced on Thursday that Watson, who started Friday’s preseason opener against the Jacksonville Jaguars, would not be playing again in the preseason.

Deshaun has “committed to undertaking the hard work on himself that is essential for his return to the NFL,” Goodell stated in a statement. “A professional evaluation and treatment plan must be followed as part of this settlement, as well as a hefty fine and a longer suspension. Our appreciation goes to Judge Robinson and Peter Harvey, whose work on these issues was crucial to our ability to arrive at this result.”

In his initial ruling on August 1, Robinson, an independent arbiter jointly appointed by the league and players’ union, ruled that Watson would serve a six-game suspension but would not be fined for violating the league’s personal conduct policy, writing in a 16-page report that “the NFL carried its burden to prove, by a preponderance of the evidence, that Mr. Watson engaged in sexual assault (as defined by the NFL) against the four therapists identified in the Report.”

Goodell stated that the evidence warranted at least a yearlong punishment, which is why the league was appealing Robinson’s decision.

The Haslams said in a statement released Thursday morning that they “understand this is a real opportunity to create meaningful change and are committed to investing in programmes in Northeast Ohio that will educate our youth regarding awareness, understanding, and most importantly, prevention of sexual misconduct and the many underlying causes of such behaviour.”

Watson has been sued by 25 different women who allege he sexually assaulted them or otherwise behaved inappropriately during massage therapy sessions with him. When the claims were filed, Watson was still a member of the Texans, but the alleged wrongdoing occurred between March 2020 and March 2021. After a judge ordered the plaintiffs of one of the 25 lawsuits to include their names in an amended petition in April 2021, the case was dismissed. Other than the one who sued him, neither of the other two women who had complaints filed against Watson actually did so.

The Final Year of Jacoby Brissett

Since Deshaun Watson will miss the first 11 games of the season due to suspension, the on will be on Jacoby Brissett to step up. As a passer, Brissett had a tough time with the Dolphins in five starts last year.

Except for one case, which has yet to be resolved, Watson has settled or agreed to settle all of his legal disputes. A total of 30 women who had filed claims or were about to do so against the Texans and the NFL for their “enabling” of Watson’s actions were settled with the team in July.

Buzbee, who represented the women who sued Watson, said in response to Thursday’s settlement, “The message today to all victims is clear: If you believe you have been sexually attacked by a prominent person, keep your voice shut and go away.” “The National Football League has proven beyond a reasonable doubt that its leadership and management do not care. Do not let this latest ‘punishment’ discourage you from speaking out about your experience of sexual assault. Do not be afraid to raise your voice and express yourself. It’s important that you have your say. You are having a positive impact. All of us are behind you 100%.”

The NFL has been looking into whether Watson violated its personal conduct rules since 2021, despite the fact that two grand juries in Texas decided not to press criminal charges against him earlier this year. Earlier in the summer, the league conducted numerous days of interviews with Watson. Several of the women were interviewed by NFL investigators.

Robinson wrote in her report that Watson’s “lack of expressed contrition” was a contributing factor to her decision to suspend him for six games after she found that he had engaged in “egregious” and “predatory” behaviour in violation of the personal conduct policy.

Watson, who had previously denied any wrongdoing and said he had “no remorse” for any of his conduct during the massage sessions, apologised to “all the women I have impacted” on Friday, just before Cleveland’s preseason opener.

In March, the Browns sent three first-round draught selections to the Texans for Watson. Later, Cleveland offered Watson the most lucrative contract in NFL history, a five-year extension that will make him the most paid player in league history.

“Indeed, we would. We thought we had enough information to make a good choice. We acknowledge that not everyone will agree with our decision, but we feel that Deshaun possesses many positive traits, and that he has made every effort to integrate himself with our team and to fulfil all of our requests “His words. We think he can make a significant, positive impact on our team and organisation after he’s through developing himself.

With a basic salary that increases to $46 million in 2023 and a signing bonus of $44.965 million, Watson’s total guaranteed compensation from the Browns is a league-record $230 million.

However, Watson was only going to lose $57,500 per game suspended without the $5 million fine imposed in the settlement since Cleveland structured his contract to include a 2022 base salary of of $1.035 million. Watson will lose a total of $632,500 in salary for the 2017–18 campaign.

As early as the first day of training camp, Cleveland Browns head coach Rob Stefanski declared that if Deshaun Watson were to be suspended, backup quarterback Jacoby Brissett would take over as the team’s starting quarterback. Stefanski has lately remarked that he has “been very impressed” with Brissett.

Stefanski remarked, “Very comfortable with him.” In my opinion, “he has a really solid comprehension of what we are attempting to achieve offensively.”

Brissett has been a backup for the majority of his career, but he has still managed to make 37 starts, where he has a 14-23 record.

According to a new report, Chinese media influence is growing in Kyrgyzstan too.